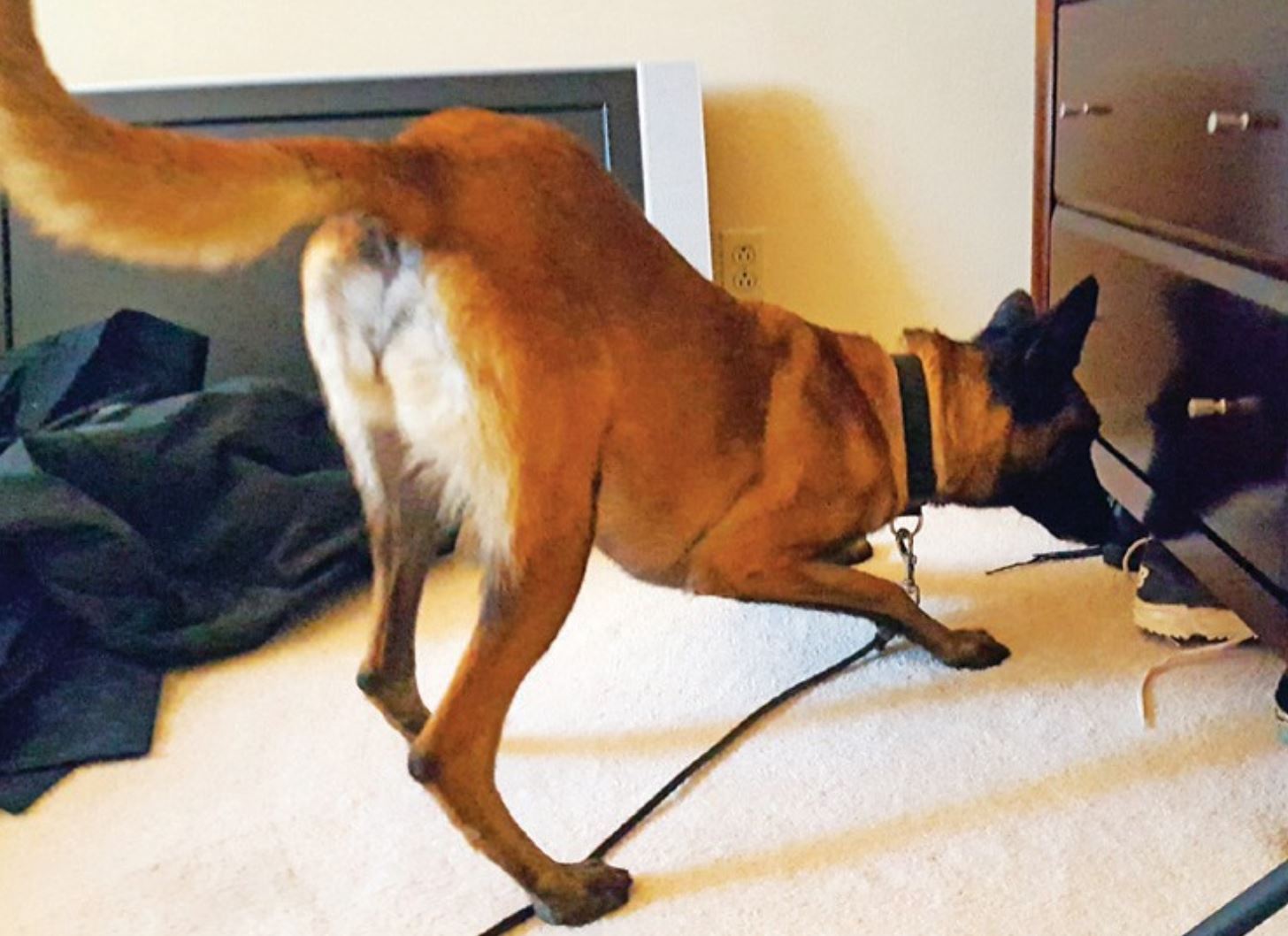 POOCH PATROL— Pita, the 4-year-old Belgian Malinois, uses her innate skills to sniff out drugs. Her new boss is Amy Doerner, an Agoura Hills private investigator who aims to help parents in the war on drugs.

Every time Pita detects the scent of drugs, the 4-year-old Belgian Malinois freezes and stares at the spot where it’s emanating from, remaining fixated on the target until her handler rewards her with a toy ball.

“I was so saddened and frustrated by watching our teens overdose,” Doerner said. “It was feeling like weekly I was hearing of another. It has become such a norm that it was making my stomach turn.”

Doerner, whose firm provides investigative services for local residents and businesses, has been working for the past five years with dogs like Pita, who are certified in both narcotic and firearm detection. She believes they’re an invaluable tool for parents.

Letting a dog come in and determine if narcotics are hidden somewhere inside the home or a car can take the guesswork out of the situation for parents who suspect their child might be abusing drugs, Doerner said. Parents can then decide how to deal with the situation.

A Simi Valley couple recently called on Doerner and Pita for help. The couple suspected their daughter was using drugs. But even after talking with her, and searching her room and belongings, they had no evidence.

They didn’t want to involve law enforcement because they were concerned about their daughter’s privacy and future, yet they wanted to be proactive in protecting her.

“Since she is a good student with high aspirations we didn’t want a mistake in her teens to tarnish the rest of her life and future career,” said the girl’s father, who asked to remain anonymous.

Shortly after Doerner and Pita began to search the family’s home, Pita froze near a closet the parents had previously searched. Following Pita’s lead, Doerner instructed the parents to look in specific area. They ended up finding drugs stashed inside a hidden compartment.

After some time in a rehab center, the girl is happy, healthy and on the path to recovery, her parents said.

“We feel blessed, like we have a second chance in life with our daughter,” the father said.

He and his wife agreed to share their story with the Acorn in the hope it might help other parents who suspect their child has a drug problem.

The cost for her canine detection services is $250 and up, Doerner said. She and Pita have done drug detection work not only for families, but for local businesses and drug rehabilitation homes, too, she said.

Dogs are particularly cut out for this line or work. Their sense of smell is 100,000 to 1 million times stronger than a human’s, according to the Ventura County Sheriff’s K-9 Unit website.

In addition to detection, dogs are used to help law enforcement agencies in situations where the safety of officers or the public is at risk. Dogs can protect their handlers, apprehend wrongdoers and assist with search-and-rescue operations.

Malinois are a medium-to-large breed of shepherd with a stubborn, hardworking, watchful and protective disposition.

Pita worked with law enforcement before Doerner adopted her. The dog had been specifically trained to locate drugs such as marijuana, heroin, cocaine, amphetamines and prescription pills, and firearms.

Work like this is a fun game for the dogs, but it’s tough on handlers who must teach their canines to recognize the odors they’re expected to find and continually train them to stay on task, Doerner said.

Doerner spends a great deal of time training Pita and her two other dogs, a Malinois named Colt and an Australian shepherd named Sammy.

Colt was adopted as a puppy for detection work, but he is not cut out for it, Doerner said. Sammy is a family pet.

All Pita cares about is her ball and her work.

“To be a good detection dog, first and foremost, they need to be ball crazy,” Doerner said. “She goes out there . . . and does such an incredible job, with such enthusiasm, it brightens my day. That’s my partner.”

Drug detection dogs almost always will find the loot, Doerner said, but they don’t usually make the best pets because they are on the crazy side.

Doerner, a Malibu native who grew up around horses, is an avid equestrian who used to work shoeing horses. She drifted away from the equine realm after her son was born more than 20 years ago. But even after becoming a private investigator, she still longed to work with animals.

When the opportunity came to work with a person who trains dogs for law enforcement and sports activities, she jumped at the chance.

“When I’m working with dogs, I think of nothing else but what our task is and what we’re trying to accomplish,” she said. “I learn from them, they learn from me.”

Read the original article on The Acorn

While Doerner Investigations is based in Agoura Hills, Amy and her team of Private Investigators service the entire Los Angeles Area, all the way to Santa Barbara. If you live in Malibu, Ventura, Santa Monica, Pasadena, San Fernando, Burbank, Simi Valley, Pasadena or anywhere in Southern California and need discreet and compassionate drug dog detection work, please reach out.

We can find drugs without getting law enforcement involved so you can get your loved one help on your own terms.

The Doerner Private Investigation team has the experience, expertise and discretion needed to get the job done.